Following the Government’s relaxation on social gatherings and the opening of food and beverage venues, the GMC is carefully considering our best options for safely opening our bar facilities for members.

This will almost certainly be limited initially to designated outside Club areas only, but we will be discussing proposals with our General Manager, Sarah, on her return from furlough next week.    We hope to have something in place to coincide with the launch of the Coolhurst Tennis Championships on 11th July which has attracted 90 entrants!

With all the expanding activity at the Club, the GMC has remained very diligent on making sure we all adhere to government demands that run alongside it, the health and safety of our members remains paramount in all our decision making.

The GMC has added an additional level of safety precautions by creating an in-house advisory panel made up of three distinguished biomedical specialists, who happen to be members of the Club. They are Sarah Fidler (professor on infectious diseases at Imperial medical school), Murray Selkirk (professor of biochemical parasitology at Imperial), and Jim Down (ITU consultant at UCLH). They have very kindly agreed to act in an advisory capacity to assist the decision making of the GMC on matters of health and safety related to the risks of the novel coronavirus. The GMC and, I have no doubt, the entire membership are very grateful for this level of helpful advice, freely given when needed, by three such eminent members of Coolhurst.

Doubling up on Tennis

As we slowly come out of lock down and continue the gradual reopening of our Club, it is very heartening that we can now play doubles again as well as singles.

It’s also very encouraging to see a number of squash members on the tennis courts taking advantage of the special arrangements made for them to play by the tennis committee.

Outdoor table tennis has also been made available on the squash balcony, organised by the bar Secretary, Nigel Hutchings. 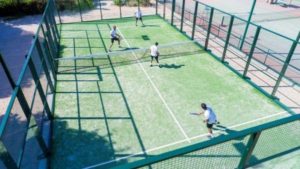 The GMC is also considering introducing the tennis/squash cross-over sport of Padel as a new racket opportunity for members.

A Fitting Farewell To David Smart

The funeral procession for former Chairman David Smart took place on Friday 26th June.  It was a sad occasion but a fitting send off to David with a lone trumpeter leading a very large crowd that included many Coolhurst members and a tennis racket guard of honour, to the tune of ‘When the Saints Come Marching In’.     The Club flag was flown at half-mast that day